The Walks starts at Torside Visitors Centre Longdendale:
Park your car at the Visitors Centre and go through the gates and up the hill to the disused Railway track which is now the Longdendale Trail, turn east onto the trail. After walking about 100 Yards you will come to a finger post indicating right (south) Wildboar Clough, ascend the wide stile, which leads to a track passing between some immature trees and then over a step stile on the left and into the woods. Now follow the track which runs parallel to the stream through this ancient Oak and Birch woodland, and climb the steep hillside crossing a stone wall and eventually emerging above the wood on the open Fell, with a wire fence crossing your path over which passes another wooden step stile. 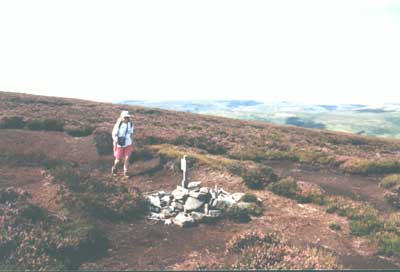 The way on now levels out, and after about half a mile it is possible to cross the Clough on your left and head North on a good path which take you back in the direction you have just come, but this time on the opposite side of the Clough.For the next two-mile you remain faithful to the edge of the gritstone escarpment, and follow the faint path running above the Grags, passing Lawrence Edge, Deer Knowl, and eventually to the dry waterfall of Dowstone Rocks.

Five minutes after leaving the Grags at Dowstone Rocks you will come to a wire fence climbing up the hill and guarding the deep Gill of Stable Clough, follow the fence uphill to the right (south) and you enter an area of Grouse butts, and below you in the Gill you can see a sandy track (this is a private track for the Grouse shooters) Keep on the narrow path which follows the fence and winds through the Grouse Butts until you are safely able to cross the stream on some water worn slabs, and gain the opposite bank next to Butt number 6. Walk downstream in a Northerly direction to the next Grouse Butt number 5, and now you will need your compass for the next leg. Leave Grouse Butt number 5 walking on a bearing of 90 degrees (east) and almost immediately you will see in front of you a pole with a white painted top standing on the moor, you will reach this pole in about 4 minutes, keep walking on the same bearing and in a further 2 minutes, you will come across a cairn with some aircraft debris piled around it's base. This is not the crash site, you need to walk on the same bearing for a further 3 Minutes to arrive at the site which is marked by a tiled plaque attached to a wooden post commemorating the Airmen who lost their lives here. 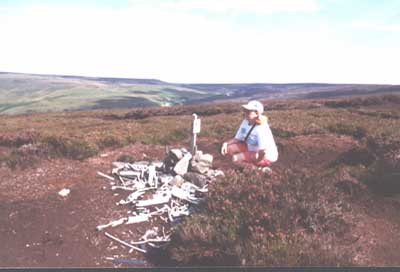 Wellington R1011 was on a night flying exercise from Wymeswold Leicestershire when it crashed into the ground here on the night of January 30th 1943. In worsening weather the crew were confident that they were on the approach to the airfield and were losing height as they began to cross the high ground of Birchen Bank Moss. As they dropped gently through the clouds they slammed into the moor, at around 1.45 am. Three men in the front of the bomber were killed instantly (Flying Officer Lane, Sergeant Rouse, and Pilot Officer Brown) the Navigator, Pilot Officer Grisdale, and a Sergeant Miller survived but were suffering from serious injuries. There is not a lot of debris present at the crash site now, but a tile with a graphic of a Wellington bomber on has been fixed to a small wooden cross by relatives of the crew I believe.

Leave the area of the crash and remain faithful to the 90 degree bearing, crossing a number of shallow cloughs in about 8 minutes you find yourself dropping into a much deeper clough, with a well worn path running from right to left, and following the west bank of the clough in a North South direction.Now take this path in the downstream direction soon passing through a wood, and then turning sharply right (east) and begin to drop steeply down to meet the stream. Turn left downstream and in about 4 minutes you join the river Etherow which you follow downstream for a further 5 minutes to arrive at the eastern end of the Longdendale Trail, you now have an easy 3 mile walk back to the visitors Centre.